F&SF has officially announced acquisition of my latest short story, “Wetherfell’s Reef Runics,” which is tentatively slated for early 2017.

To mark the occasion, I present the first paragraph:

The visitor drowned at Hollows Reef while Ambrose Sabala, mid-snorkel, was making a gleeful mental inventory of the morning’s haul—not of fish, but of books. Ambrose drifted over the dull, trampled coral beds with ears full of seawater, snorkel mouthpiece firmly clenched in his teeth, three-pronged pole spear dangling, and did not hear the sirens wailing louder and softer and louder again as emergency vehicles raced along the folds of the ocean highway. He had raided the Friends of the Library bin outside the Schefferville Library that morning, and with one ten dollar bill taken away a stack of first editions in good and even mint condition. A Bret Easton Ellis, stowed in someone’s luggage, then unpacked and left behind—no doubt to make room for a resin tiki or a seashell mug. A biography of Robert Louis Stevenson, also unread. An untouched copy of The Marriage Plot, or anyway one that had been touched only in order that it might flatten a dozen photographs of a bat mitzvah and family surfing lessons. Ambrose pulled his spear back taut on its rubber sling and released it half-heartedly in the direction of a trigger fish, which failed to react except to swerve away slowly from the empty triple threat of his barbed prongs.

This is the first of what I hope will be a new series of stories centered on Castaway Books, a secondhand bookshop located on the slightly skewed Hawaiian island of Tauai. 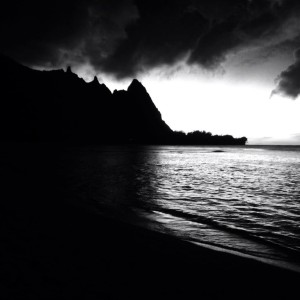