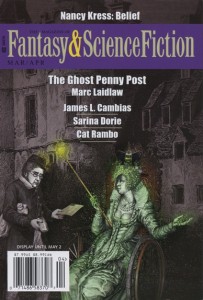 Now available, wherever fine rare periodicals are sold, “The Ghost Penny Post” is the cover story for the March/April 2016 issue of The Magazine of Fantasy & Science Fiction. This beautiful and stunningly weird cover is by Jason Van Hollander. The issue has been reviewed by a few online websites, including Amazing Stories, Tangent Online, and SFRevue.

An idea I’d been carrying around for over 15 years, it was finally written in response to a request for stories about videogames; but ultimately, while it does involve games, the video element is nonexistent. It might be considered steampunk thanks to the Victorian period setting, but the only steam in it comes from a kettle. The keen observer might notice that it takes place partly in the bewildering village of Binderwood, referenced elsewhere on this site. There are no coherent observations to be drawn from this, however. I had simply run out of names for made-up places, I assure you. Please don’t see patterns where none exist!