In the latest issue of The Magazine of Fantasy & Science Fiction, there’s a mention that my next Gorlen Vizenfirthe story, “Quickstone,” will appear in the March issue.  I’m not sure that gives you enough time to subscribe, but you should do it anyway.  Meanwhile, buried in the forum, Gordon Van Gelder announces that F&SF will be going to a bimonthly schedule after the March issue.  Double-sized issues, half as often.  I hope this helps them survive to the next millennium.

Erwin Schrodinger got pulled over at the border. They asked him what he had in the trunk of his car. While he pondered how to respond without sounding insane, he looked up at the border crossing sign and discovered that he was being detained midway between Mexifornia and Califexico. “That depends,” he answered.

One customs agent held him at gunpoint while the others went around to the back and, without asking for the keys, sprang the trunk with a crowbar. There were screams. The agent with the gun ran around back to see what was happening; nor did he return.

Schrodinger put the car into drive and pulled forward into San Diego with a lurch that caused the trunk to bang shut.

Sometimes, even today, drunken fratboys coming back from Tijuana say that on still nights, above the honking of the stalled cars and the cries of the Chiclet vendors, you can hear the Policia screaming. The word they are screaming sounds a little like meow. 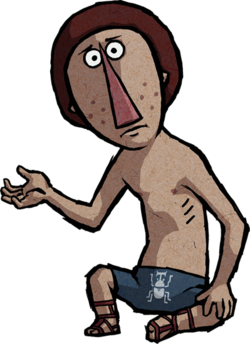 Tonight at Fantagraphics in Seattle, a wonderful event: Paul di Filippo appeared with Jim Woodring (see his website on the blog’s sidebar) to read from Cosmocopia, which you can buy here (in a limited edition of 500 copies). Cosmocopia is a novel inspired by Woodring’s art, accompanied by some of said art, including a 500 piece Woodring jigsaw puzzle.

I have known Paul for many years, but we have never met in person. Years ago, he circulated a small zine called Astral Avenue, and I began to bury him in correspondence, little knowing how well Paul would rise to the challenge. For many years, I would receive one or two envelopes a week from Paul, each one heavily and lovingly collaged, and full of weird ephemera he’d scoured from the antique stores and garage sales of Providence. We eventually appeared in Mirrorshades together, and collaborated on a short story about the photographer Weegee (“Sleep is Where You Find It” aka “The Human Head Cakebox Murders”), and even tried to get a collaborative novel off the ground. Weirdly, with the advent of email, we corresponded less. When I lived on Long Island in 1988, we spoke on the phone once. We’d never met in the flesh until tonight. So to meet Paul and Jim Woodring, one of my artist heroes…in a shop crammed with Fantagraphics’s amazing creations…it was quite a night. Followed by huge amounts of great food, hilarious conversation and Hard Corn Poneography at Hing Loon. As an extra bonus, I met Max Woodring, who it turned out I’d already run into at the Gage Academy a few months ago. So it was a night packed with import and sure to give rise to significant strange events somewhere up ahead and unforeseen. I can’t wait to read Cosmocopia–and one of these rainy nights, maybe I’ll tackle the puzzle as well.

This is what the King County library catalog index has in its summary of The Mayor of Casterbridge:

“A drunken, unemployed hay-trusser sells his wife and daughter at a fair, is eventually reunited with them when he is the mayor of a thriving market town, but in the end he becomes bankrupt and a social outcast.”

Hey!  Maybe I didn’t want to know the whole plot!

Over at the F&SF website, John Joseph Adams has posted an interview with me about the writing of “Childrun,” the latest Gorlen Vizenfirthe story.

Well, since Laird Barron mentioned it, the wrapper of secrecy is officially off Ellen Datlow’s forthcoming anthology, Lovecraft Unbound (due in 2010 from M Press). (2010 is the most fun date to type since 2001.) I’ve been waiting to say something about it, since I wrote a story specifically for this collection. The title is “Leng.” If you believe it to have been inspired by my recent travels, you’d be correct.

RE/Search Publications has been publishing amazing books for years, works by and about Charles Willeford, William Burroughs, Survival Research Laboratories, punk culture, urban primitives, the list goes on and on. Their early book on J.G. Ballard had a huge influence on me, probably being the biggest single spark to my first novel, Dad’s Nuke (along with the simple fact that I was stewing in the grey elevated bowels of Pacific Gas & Electric). Of only slightly lesser impact, their hilarious Pranks. Today, I received, courtesy of RE/Search founder V. Vale, a copy of their latest Ballard book, J.G. Ballard: Conversations. A fat collection of Ballard interviews, full of those bright meaty nuggets that spark complete psychic rearrangements and little things like, oh, novels. Many thanks, Vale. I hope this link brings you at least one lucky new soul who had never before known of all the treasures stored at RE/Search.

Ellen Datlow has posted the first I’ve heard of it on her livejournal. This is very sad. Disch’s books and stories are remarkable and have been a big influence on me since I was a teenager, plowing through White Fang Goes Dingo. 334 is one of the great works of American sf, although others might pick Camp Concentration or another of his books for that honor. He has always been a writer whose work I looked up to. I only met him once, at a Norwescon in 1982, and my memories are mainly of him looming through crowded convention suites. He had arrived to announce the creation of the Philip K. Dick award, and summed up PKD’s passing with these words (which I believe he cribbed from Dick): “Fucking Death.”

Some months back, I pointed people toward Disch’s own livejournal, where he was turning out poetry at an astonishing rate. It’s all still there, and more besides.

And here is a recent podcast, along with a more recent photograph of Disch.  I remember him looking like the fellow in the photo I posted above, so I’ll leave that where it is.  Today I was in a bookstore buying a used SF Book Club edition of Triplicities.  The cashier said, “That’s a great collection.  He’s a wonderful writer.”  I said, “He just died.  Did you know that?”  And then the most quickly stifled, embarrassed, conversation-ending sort of “Yeah” I’ve ever heard in conversation.  Neither of us knew what to say.  I took my book and left.

The August 2008 issue of F&SF is out, featuring my latest Gorlen Vizenfirthe story, and the magazine is hosting online feedback in its forums. Instant reader response to magazine fiction is a new wrinkle. I’m used to stories appearing in magazines with nary the plop you’d hear from dropping a stone in a scum-coated puddle. Anyway, “Childrun” is taking a bit of a drubbing, but my hide is thicker for it. I must get better at playtesting these things! And I’m content knowing that the next two Gorlen stories, whenever they may appear, are much better. “Childrun” was a warm-up exercise, a way of reacquainting myself with a favorite old character, just to see what he’s been up to. It doesn’t advance his life story much. The next one, “Quickstone,” will. 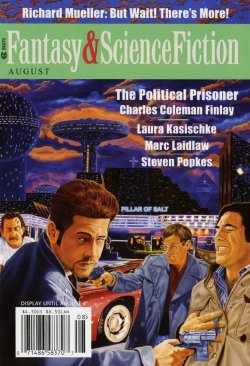